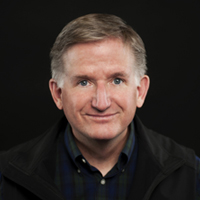 Rogue Community College’s fifth president, Dr. Peter Angstadt, retired after twelve successful years in 2016.  He joined RCC in 2004 from Colorado, where he served as president of Colorado Northwestern Community College. He also has served as the Chief Financial Officer and Dean of College Services at Clackamas Community College in Oregon City.

Angstadt first began visiting the Rogue Valley in 1978, while working as a commercial river guide. He holds a bachelor’s degree in zoology from Colorado State University (CSU) and two master’s degrees: an M. Ed in higher education administration from CSU, and an MBA from Idaho State University. He earned his doctorate in educational policy and management from the University of Oregon. Angstadt also served two terms, from 1990 to 1998, as the full-time mayor of Pocatello, Idaho, population 50,000.

Dr. Angstadt and his wife, Denise, have five children.  He is an active member of the Grants Pass Rotary Club.  His public service is extensive, and includes membership on the Boards of Directors of Rogue Federal Credit Union,  Asante and The Fourway Foundation Board.  He teaches part-time for the SOU MBA program, and is the beloved Treasurer of the RCC Foundation.