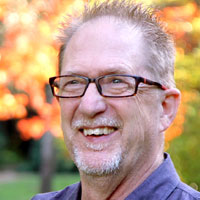 Grant Walker is currently working as a marketing manager in the Asante Communications and Marketing Dept. He also worked at Asante from 2007-2014.

Before rejoining Asante, Grant served as director of Marketing and PIO at Rogue Community College, an institution he still loves. “It’s an honor to be able to serve on the RCC Foundation,” he said.

Before moving to Oregon in 2007, Grant worked for nine years at Southern Illinois Healthcare. Earlier, he taught English at Murphysboro High School in Illinois and introduction to theater classes to inmates enrolled in the Illinois Department of Corrections college education program.

Grant holds a master’s degree in theater and playwriting from Southern Illinois University in Carbondale; a bachelor’s degree in English from Portland State University; and an associate degree in television production from Mt. Hood Community College.

He is a member of the Public Relations Society of America and earned his accreditation in public relations in 2015. He volunteers as a course facilitator in APR.

He also volunteers in the community, most recently serving a communications role with the Rogue Gateway Rotary. He has served on the board for Healthcare Communicators of Oregon and the Jackson County Sexual Assault Response Team.