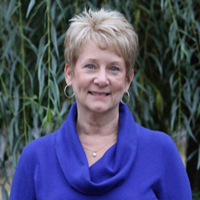 Claudia Sullivan was born and raised in Northern California.  After high school graduation she worked in retail sales.  Claudia and her husband, Geoff, moved to Southern Oregon in 1976 to start a family.  While their sons were young, she attended RCC and earned an Associate’s degree in Business Management.

As Claudia took classes at RCC, she worked in the Registrar’s office as a student employee. She so enjoyed the experience that she applied and was hired as a Registration Specialist in 1991 after graduation.  While working at RCC and raising a family with her husband, she attended Northwest Christian University and earned a Bachelor’s degree in Managerial Leadership.

During Claudia’s tenure at RCC she has seen the College grow to serve both Josephine and Jackson Counties at three campuses and several sites.  She is proud of her contributions to that growth and to the continuing improvements of services to students. She looks forward to her term on the board and hope that her years of experience will provide a positive contribution to the health of this institution.