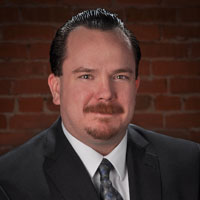 Medford Attorney Nick Naumes is with the firm of Frohnmayer, Deatherage et al. and works primarily in litigation. A 7th generation native of the State of Jefferson, and 5th generation native of the Rogue Valley, he served in the US Navy for five years as an Aviation Electronics Technician. Mr. Naumes received a Certificate from RCC as a Reserve Officer from our Law Enforcement Academy. He later obtained an undergraduate degree with honors from SOU. He then received his Doctor of Jurisprudence with honors from Willamette University College of Law in Salem, OR.

He spent several years working for a busy legal office in Salem where he learned a great deal about his profession. However, he couldn’t resist the opportunity to move back to Southern Oregon. He has lots of family in Southern Oregon and they are also thrilled he’s back in the area.

Nick has many interests including baseball, music, wine tasting and fencing. He is a rabid San Francisco Giants fan, and a voluminous reader. His personal library consists of several thousand volumes and he reads more than two hundred books annually. Fitting his degree from SOU he reads many history books, but also plenty of thriller, horror, mystery, science fiction and fantasy novels. He is also a supporter of the Magdalene Home for homeless pregnant teens and teen mothers.

We are very pleased to have him with us on the Foundation board. As a graduate of RCC, and a veteran, he has experience that makes him a real asset for us.